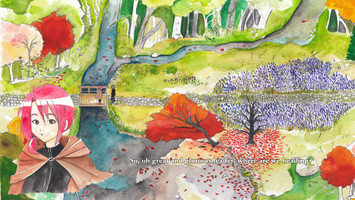 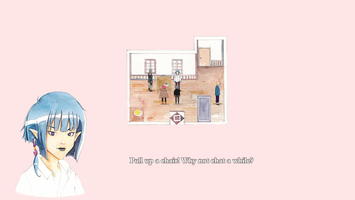 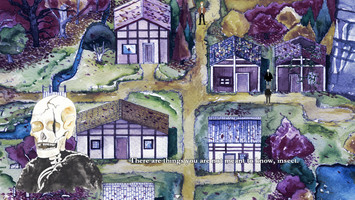 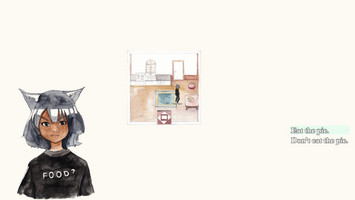 Hope ya'll taking care of yourselves during these tough times~

Check out the first video in my dev diary series!

This goes into my influences and why I made Shivering Hearts rather than specifically talking about the technical side of things.

Thanks and have a great day~

Gosh, thank you so much for making this vid. It was super-duper interesting. I like the thought you put into the half-open ending. It gives the player a chance to imagine what the next adventure might be. And that's really cool.
I love stories that feel like a chapter in the protagonist's life, but not the whole book.
In just two hours I got really involved with the characters. Especially our two mischievous adventurers. Rin's mix of existential dread and sardonic humor is just a perfect combo. And Skye's relationship to food is strangely compelling? Like, enjoying food is such a simple thing and yet I've forgotten almost all about it.
Can't wait for the next video! So get to work.
Haha, kidding.
Or am I...
No, but seriously thank you. This whole experience made me want to start writing again. And take some time to breathe. Maybe sit in the sun for a bit.

Hahaha aww no worries Puma! I'm so glad you found it interesting, hope my voice wasn't too loud.

Yus! I really love that as well, having a mixture of both a self-contained story but set against a larger backdrop that can allow for me to take the setting and push it to grander scales if I get the opportunity to do so. My favourite stories have protagonists who are wanderers because it allows for episodic storytelling, which I think has a lot of advantages over stories which advertise themselves as "the most important story ever told and every episode is building up to something incredibly meaningful, just keep watching and you'll see the pay-off" sort of stories, like the Game of Thrones TV show or the Marvel Cinematic Universe, which usually just sets up incredibly high expectations from the audiences (don't get me wrong, if you like that sort of thing then more power to you).

Instead, what I love more are episodic stories like Kino's Journey (season 1), or Mushishi, or Doctor Who (before the 11th Doctor Matt Smith and the show-runners fell into the same trap of "This is the most important story ever being told and you have to see the pay-off!" syndrome which turned me off the show significantly). Those sort of shows allowed for quieter storytelling, and allowed you breathing room to soak in the setting and the characters. By breaking up each story into chapters, it allowed each episode to explore themes and moral dilemmas in a very self-contained way, and it really gave a sense of adventure (I heard One Piece also does this really well, but I don't know if I'll ever get the time to read/watch something that monstrously huge). These sort of shows also usually didn't end with some culminating conclusion, because that ran against the purpose of the show. So they always end open-endedly, and like you said, it's almost better that you can just imagine the rest of their adventures.

HAHA but wow, I'm so so glad that you're finding it engaging! Yea I really loved writing dialogue between Skye and Rin, and seeing how they can play off each other.

I totes agree you with the food thing. I think the majority of my life, I've only considered food as something that I put into my mouth to nourish me. But it's only the past few years where I really started appreciating food, and just appreciating things in general. You're right, it's very easy to forget the simple joys of life. Maybe because we are bombarded by thousands of images from both traditional media and social media that it becomes so overwhelming. I'm very guilty of this as well, especially when making Shivering Hearts. Most of my life in the past 12 months has just been me in my room in front of a screen, either my phone or my computer, and that was before all these lockdown measures. And it was hard for me to not feel guilty if I wasn't spending time working on SH. It's very easy for us as a digital society to place huge significance on what we see on the screen, and we should spend more time just enjoying the simple pleasures of, enjoying food, basking in the sun, and doing something creative for the sake of enjoying it.

Wow I'm starting to sound like some hack fraud self-help book LOL. But thanks again for the comment :)

Ahaha I'm definitely keen on making another video, it's more just deciding on a topic to write about, but I should just decide on something and go for it.

Haha, I'm the type to slowly back away when people tell me to live in the moment.
As John Mulaney would say "the moment's mediocre at best"
But if I'm honest, that's because most of my life is also spent in front of the computer. Hence, you know, the whole sitting in the sun thing.
So maybe there is a little truth to this self-help stuff, huh? The angsty teen I was would be appalled right now...

Never been a big fan of the mcu, for all kinds of reasons. One coworker was shocked when I said this. Genuine shock. It was hilarious.
But like, aren't there enough epic stories? We've been telling 'em for thousands of years now...
My grandpa used to read me the Lord of the Rings when I was a kid. It was amazing. It's got a special place in my heart. If modern stories  are going to have heroes, primeval foes, war and vengeful gods then they have to be REALLY gripping. Because they're competing against stories that in some cases might outlive humanity.
Okay, that was a bit dramatic.

So yeah, episodic stories can be super meaningful without needing to be "the most important story ever told". Star Trek did that too. Every episode was it's own little story.
I also like stories that just focus on someone's everyday life. Because, there's actually so much going on. How they furnished their home,  their relationship to their family or what they do after work. Jim Jarmusch makes movies kind of like that. Except his characters are usually insanely bored. And there's like a constant weirdness in the air too.

I gotta give Kino's Journey another shot. I know I'll like it if I give it a chance.
Spice and Wolf did that thing where the episodes are their own self-contained story, but where there's also this abstract goal of "heading North". It feels like something big might happen, but there's no rush to get to it.
No opinion on One Piece however. It's been recommended to me...countless times, but the aesthetic just isn't my thing. Maybe I'm missing out.

Well I'm gonna go and try to cook something now. Really cook. Not just spaghetti.
Oh and btw, I'm the same person who asked you about Skye's name on Youtube. Maybe you figured that out. It just felt weird to be two people, haha.

LOL, I'm watching John Mulaney properly now because you mentioned, that's such a perfect quote. Oh man, I want to reply to each one of your points cos it's really interesting, but I don't wanna seem like I'm word vomiting haha. And you're the person on Youtube! I actually didn't make the connection, but thanks for commenting on both.

I get you though, the whole notion of living in the moment just feels like a catch-all blanket phrase/slogan that gets parroted a lot til it loses meaning, and doesn't fully address the root of a lot of issues.

Ahaha there are some kernels of truth, though to be honest I've read some self-help blogs/books and this might sound mean but sometimes they start to feel a little... cult-ish? Hmm, that might sound too strong. There's a lot of white noise to filter out, and when certain blogs end with "Please buy my book" or "Donate to this Paypal for the church of the 3rd order" it raises so many red flags in my head and I nope out. Personally I find therapy much more helpful because it is a one on one engagement, but I know it's not for everyone because it asks for a lot of vulnerability.

Aha was extremely angsty as a teen as well. I'd like to think I've moved passed it, but I think you still carry that angst with you into adulthood. But I think there is some... value(?) in having that period of angst. It's a period of life where you become a lot more in tune with deeper levels of emotions, both highs and lows.

I can nitpick the MCU forever lol, as a whole I just felt really unengaged. But your coworkers reaction is hilarious.

I love it when people talk dramatically! That just shows that you care about the subject matter haha. But that's such a touching experience with you and your grandpa, wow. So moved.

Ahhh Star Trek TGO, I really wanna watch as well, especially after being real disappointed by the reboot movies and thinking I'm doing myself an extreme injustice by having my frame of reference of the series just being these 2 average movies. I've heard great things about Spice and Wolf as well! Jim Jarmusch HAHA, that sounds real interesting actually. I've only seen Ghost Dog but I have a feeling it's quite different from his usual oeuvre. There was a lot of downtime and exploring the mundanity of the protagonist's life in that movie as well though.

Anyways, I should get back to recording more Youtube footage. Have fun cooking~ Haha I get that, most days I cook basic pasta as well.

I think I ended up eating an egg. That was my lunch. It's actually less cooking that pasta.
Ugh.
I love Ghost Dog! Awesome soundtrack...
Coffee and Cigarettes was really funny, I thought.  Bunch of sketches with bored people talking. You'll also get to brag about watching black and white indie movies with bizarre dialogues. Total hipster move.
And yes please add Star Trek to your backlog. It's important. For science.
Personally, I love the original series. It's more than a little dated however....
Next Generation feels more modern. Plus there's Sir Patrick Stewart being all shakespearean on screen, which is awesome.
When I was kid I had this fantasy that the afterlife was this huge library containing all the stories ever told. And you'd be free to spend eternity there. But now I wanna live my own story, haha. Be the protagonist of my own life!
Ah darn, back in self-help territory again.
But I've bothered you enough now. Sorry, I'll let you get back to work and life and things (>_<)"

Ahaha no worries, always good to hear from you :)