Thought I'd try use this devlog function! Pretty nifty, actually.

I just wanna say that I'm creating a free trial version for Shivering Hearts at the moment. I actually feel quite bad in completely forgetting to make a demo version because I do value the role demos serve for the product.

However I don't exactly want to make a version of a demo where it feels like the experience cuts off during a crucial moment like other demos such as the Resident Evil 3 or Final Fantasy 7 HD demos, or even my Ili demo where the game actually just closes itself during the end.

Instead I want to have the player end up in a completely new and strange place, and to give players of just the demo of Shivering Hearts some kind of resolution. I also want to do 1 more environmental drawing as a thank you to the players of the demo.

I honestly am so grateful for anyone who has bought the game, but also to the many, many people who took time out of their life to even look at what I'm making. I want to extend that gratitude to people who would play the trial version of the game. I don't want people to feel obligated to buy my game even after playing the demo.

This just means it might take a couple of days to create this demo to the standards that I'm proud of.

On another note, the whole process of releasing the game has been really tough, and emotionally very harrowing. But it fills my heart that so many people have come to see what I have made, and all the congratulations I have received for coming this far.

My main goal is not to make a whole bunch of money from this, but instead to share these feelings inside and to comfort those who feel stressed/lonely/confused during whatever point in their lives. I know that putting a price-tag limits the audience and makes it harder for the product/experience to disseminate to a wider audience, especially in these times of financial and domestic unrest. I hope by lowering the price and by creating a polished, free trial version would alleviate these issues.

Again, if anyone has paid $10 USD for Shivering Hearts and feels like they want a partial refund, I'll be happy to do everything in my power to honour some kind of refund.

One of the main things I have learned doing this whole GameDev thing is that the work never ends. There's always more work to be done. It's just about finding that balance between work and life so that you don't get burnt out or hurt yourself and the others around you emotionally.

On a less depressing note, I've attached a drawing of Bulbasaur I did recently. He's a cute bastard. 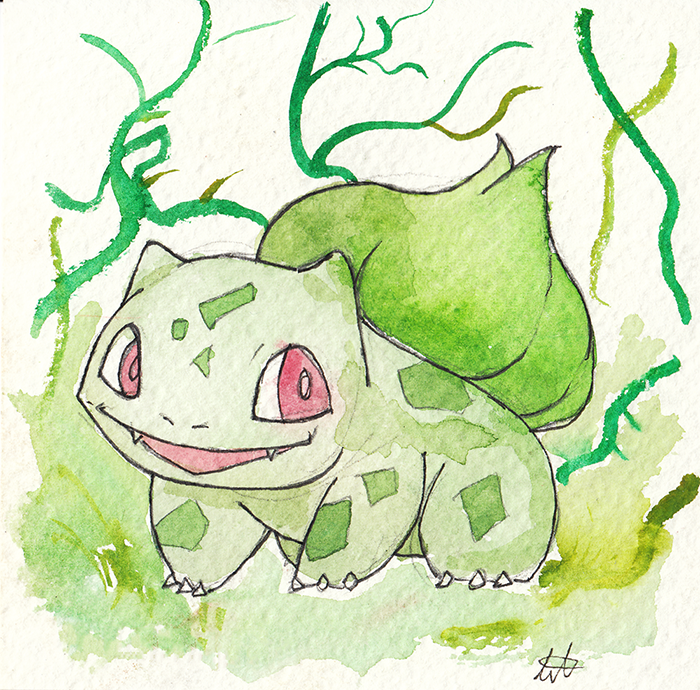 If you have read this far, then thank you.

Thank you so much for the reply Teacurry. Will post an update when I've made decent progress on the drawing. I'm happy to hear that you always wanted to see more hand-painted games, that's been my same thought for many years. Hehe yea he's such a cutie :)